JANDA Company, Inc. is a longstanding global manufacturer and distributor of resistance welding equipment and supplies. The California-based company has been in business for over 40 years.  JANDA’s customer base often relies on its expertise to build, install, and service resistance welding machines and supply everything from electrodes to controls, transformers, welding guns, and more. 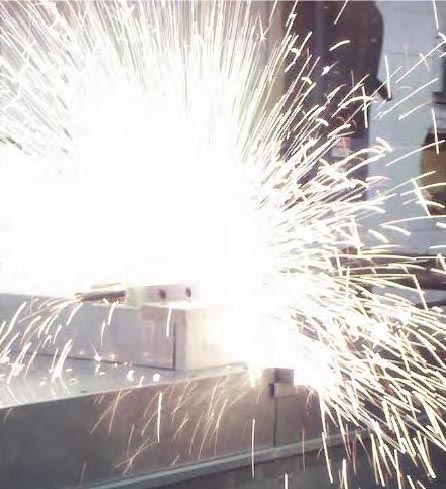 JANDA offers and supports an expansive array of resistance welding products, including Flash welding machines. Mike Smith, Manager of Resistance Welding Technical Support, is responsible for supporting and servicing a large installation base of resistance welding machines and controls. Smith said, “I’ve worked on just about every type of resistance welding installation on the market. We always strive to meet or exceed customer requirements. “JANDA built a Flash welder for a company producing special bridge supports used by the California Department of Transportation. During machine testing, Mike measured 1,500 amp surges on the power line caused by the machine. The challenge was that this power consumption was more than what the customer’s power company, Southern California Edison, would allow. The first time the machine ran using the conventional SCR control, the machine blew the fuses on the telephone pole and caused a blackout on the entire block. A Distribution Engineer at Southern California Edison stated that their machine “negatively impacts the amount of voltage flicker experienced by customers connected to the 12kV system due to this welder”.  The second time they blacked out the entire block the power company threatened an ultimatum:   Do this again and we’ll permanently shut off the factory power, or pay $380,000 to string new powerlines across 19 poles to a substation to prevent further disruptions.

The customer called JANDA to see if there was another option. Smith and his team identified that the conventional SCR control on the machine might be impacting the power consumption. JANDA reached out to WeldComputer’s experts to see if they had a control that would prevent the high power surges without compromising welding performance.

“WeldComputer affirmed that replacing the SCR with a Wave Synthesis Control would reduce the power draw and surges on the power line.  It took some negotiating with the power company, but eventually, we got permission to install the WeldComputer control and test it out.” As soon as the customer flipped the switch, Smith knew they had picked a winner. The power company reported that the new control reduced the flicker on the power grid to allowable limits. “With the WeldComputer control the power draw was only at 107 amps,” said Smith. “I measured it using the same meter and on the same power lines that previously measured 14 times that amount with the other control. I couldn’t believe it was the same machine!”

The machine was welding more efficiently with less power, too. “I’ve installed and serviced just about every resistance welding control on the market.  No other control delivers higher performance than the WeldComputer”, said Smith. “This machine was no exception. We were getting better performance and flashing consistency. The WeldComputer Control is clearly the best control choice for any flash welding operation.”

In addition to having a superior product, Smith was thrilled with the level of support and resistance welding expertise that WeldComputer’s engineers provided. “When there’s a problem, WeldComputer is there to answer. In my experience, no other controls company provides better support than WeldComputer.  They make me feel like I’m their only customer.”