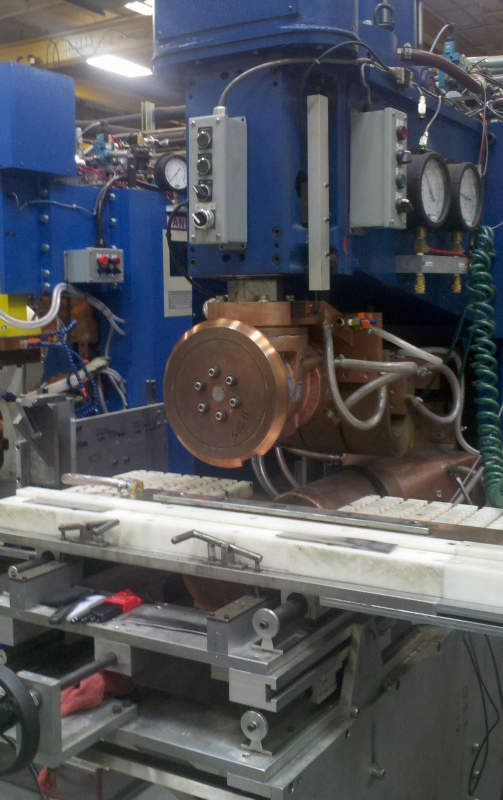 It can be expected, though, that an MFDC transformer will have a lower life expectancy than the same KVA AC transformer. So, it is advisable to select a larger KVA MFDC transformer than needed, because operating it below the KVA rating will allow the diodes in the transformer to last longer before they fail. The AC transformer has no diodes and can take a lot more abuse without failing.

Whichever transformer type is selected, it should be sized to meet the electrical requirement of the biggest weld job that will be produced on the machine.

When resistance seam welding materials such as Inconel, current impulses with well-defined cool times between each impulse result in more robust welding performance. This is achieved with an AC welding transformer because the current quickly decays to zero after each impulse. MFDC impairs the ability to make well-defined cool times between each impulse. This is because it takes more time for the current to decay to zero after each impulse. The result is less robust welding performance. This also causes the seam wheels with the DC transformer to degrade faster and run hotter than when making the same welds with an AC transformer.

The DC welding current also magnetizes the part and the machine. Magnetic filings attract to the magnetized machine, which over time, work their way into the machine moving linkages. This degrades the smoothness of the ram and its motion dynamics, resulting in poorer machine mechanical repeatability and more frequent maintenance. AC welding current naturally degausses the part and machine, which keeps the machine from turning into a magnet that attracts filings.